We Service All of St. Charles and St. Louis Counties to Include O’Fallon, St. Peters, St. Charles, Chesterfield, and All Surrounding Areas!

Are you tired of seeing mold, mildew, and algae take over your outdoor surfaces? If so, look no further than the top-notch pressure washing and window cleaning in Chesterfield, MO, provided by the team at Window-Brite. When your residential or commercial business needs professional cleaning, it’s time to call the experts.

We use a soft-wash system that’s designed to give you a safe and effectively clean without fear of damaging your property. Some companies use harsh chemicals and high pressure to clean residential and commercial properties. However, this can cause serious damage to your home or business.

At Window-Brite of Chesterfield, MO, we’re dedicated to cleaning your surfaces efficiently and professionally. Our team is ready to tackle your pressure washing or window cleaning project, no matter how big or small. Let the professionals at Window-Brite handle your job. Get in touch with us today for more information.

To eliminate mold, mildew, algae, and dirt with the use of soft-washing technology.

To prevent mold, mildew, germs, and insects from infesting your home.

To mitigate fire hazards and discourage bugs and birds from using your home as theirs.

To give your home the curb appeal you’ve always wanted.

To keep your home safe from germs and bacteria.

To wash away dirt and grime from these important outdoor living spaces, where memories are made.

To maximize the curb appeal and safety of your property.

to eliminate grime and stains from your commercial property.

For buildings, parking lots, sidewalks, and more to make your apartment complex stunning.

To get your vehicles looking like they just came off the lot.

to strike that one hassle off your holiday to-do list while making all your winter wonderland dreams come true. 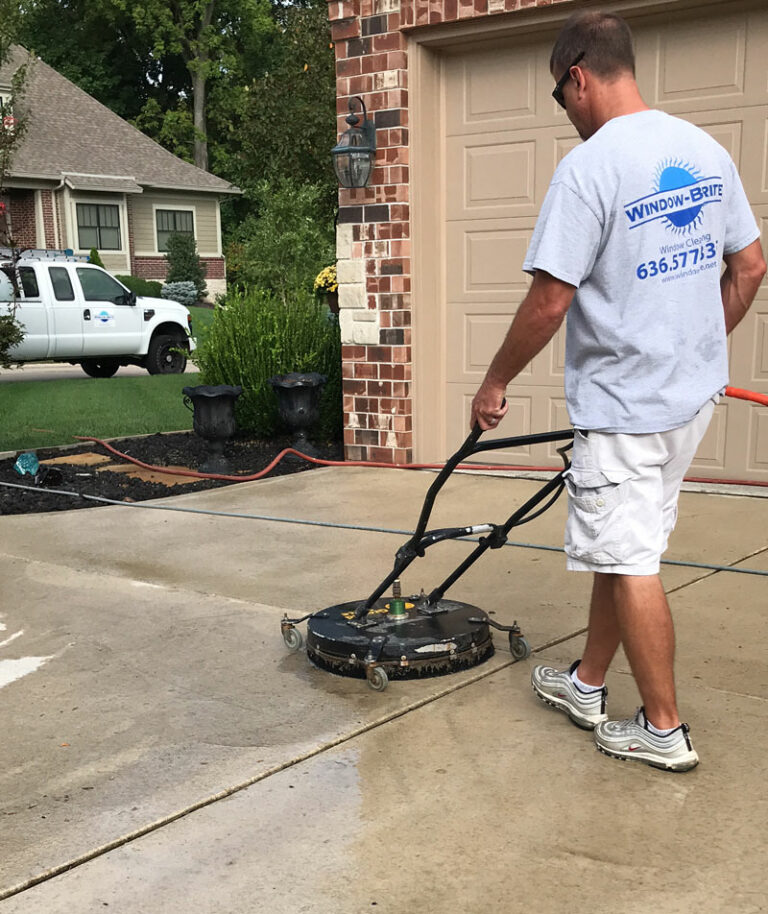 Our team provides professional pressure washing and window cleaning services at prices you can afford. When you schedule an appointment, our friendly and professional team will work with you to get the best price on your project.

We pride ourselves on being your trusted technicians for all commercial and residential cleaning services. Our certified and insured team is here to get your home or business looking good as new.

Reliability a Phone Call Away

From the moment you call to the time we knock on your door, our technicians will go above and beyond to provide reliable services. Trust Window-Brite to get your property looking and feeling spectacular!

Chesterfield, MO, was settled in 1764 by Canadian salt miners, farmers, and fur traders. Auguste Chouteau and his son, Pierre Laclède, founded the area due to its proximity to the Missouri River. Historical communities such as Gumbo, Monarch, Bonhomme, Lake, and Bellefontaine were incorporated in the 19th and 20th centuries. Chesterfield, located 25 miles west of St. Louis, became home to general stores, saloons, post offices, blacksmiths, and more as the community grew. By 1920, the Lambert–St. Louis International Airport opened to the St. Louis and Chesterfield, MO, communities. Decades later, the busy town of Chesterfield, MO, housing 47,484 residents, became incorporated in 1988. Chesterfield is home to wonderful schools, nationally regarded hospitals, and tons of eateries and recreational activities. Today, there are tons of things to do with various parks and trails, shopping areas, playgrounds, historical sites, and fun at the Butterfly House!

Get a Free Quote in Chesterfield Today

Are you ready to get a long-lasting clean to brighten your home business? If so, you’ve come to the right place. The knowledgeable technicians at Window-Brite in Chesterfield, MO, are ready to tackle your project. Whether you need 100+ square feet of outdoor space to pressure wash or just a few windows in your home to clean, we’ve got your back. Trust the professionals at Window-Brite to take care of all your cleaning needs. Give us a call today at (636) 577-3325 to schedule an appointment or for a free estimate!